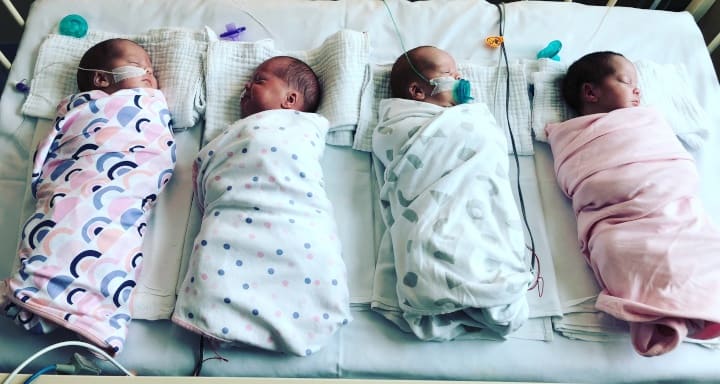 Christchurch Women’s Hospital (CWH) is celebrating the recent arrival of quadruplets, born at its maternity unit to a Timaru couple.

While the hospital has seen an increased number of multiple births in recent times, quadruplets are extremely rare.

The babies – three girls and one boy – were delivered via caesarean section at 28 weeks and 4 days gestation and, since their birth in August, were resident in CWH’s neonatal unit they were able to go home earlier this month.

Consultant Obstetrician Lisa Rofe who was on call at the time, says planning for the delivery began several weeks in advance and involved teams from fetal medicine, neonatal, midwifery and anaesthetics.

For the delivery of the quadruplets, two adjacent birthing theatres were used with specialist teams designated to each baby.

Dr Rofe says it was an extremely organised delivery, and one with an especially joyous and exciting atmosphere. “For our medical , nursing and midwifery teams present it was most definitely a once-in-a-career event, and a real privilege to be a part of. To have such a good outcome for mother and babies was a huge relief, due in part to the full team involved in pre-planning.”

The obstetrician who delivered the four babies, and does not wish to be named, agreed that the birth “went exactly to plan”, right down to the double labelling of the clamps used to cut the umbilical cords, to ensure there were no mix-ups.

The risks involved with a multiple birth pregnancy include miscarriage, extreme prematurity and growth issues, while the mother must be monitored frequently for signs of anaemia and pre-eclampsia.

In this instance the quadruplets comprised one set of identical twin girls who shared the same placenta, and fraternal twins – a boy and girl.

Canterbury DHB congratulates the Macdonald family on their new arrivals, and wishes them all a healthy and happy future.