Staff, patients and their families celebrated the opening of the new interim Children's Haematology and Oncology (CHOC) Centre at Christchurch Hospital on Friday (30 Jan). 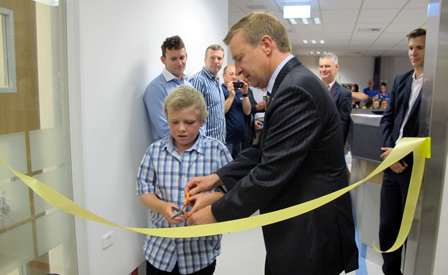 Speaking at the event, Canterbury District Health Board CEO David Meates said the move into this temporary unit was a significant achievement for many reasons.

“This facility has been a very long time coming. In fact, this unit represents the third attempt to find a new home for some of our most vulnerable patients and their families,” Mr Meates said.

“We were all set to start construction before the first quake, and those plans were shelved when the site was deemed no longer suitable. Our second choice was to build on to the Riverside which didn't proceed, and this third option, was not without its challenges – however, I think despite the sacrifices and disruption for so many people, it's been worth the wait.”

It took 10 months to convert the former physiotherapy department on the Lower Ground Floor of the Clinical Services building.

“The early stages, in particular, were noisy and trying for everyone.

With the use of jackhammers, demolition, and work for seismic strengthening, at times it must have felt like it was never going to end.

“We appreciate how patient everyone has been. Despite the significant disruption, people have got on with their jobs – our staff and patients have become used to sharing the hospital with a constant stream of construction workers.

“I'm thrilled with the result and know it's going to be a fantastic home for CHOC until they move into the new Acute Services Building in 2018. At that time this facility will be used by another clinical service.”

A highlight of the opening was a video performance by some of the CHOC patients who put their spin on an old classic, Kung Fu Fighting. Half a dozen patients, and some CHOC staff, took part in the filming for the song one morning, and had a thoroughly enjoyable time.

Chrissy Bond, CHOC Charge Nurse Manager said everyone was excited to move into the unit, which has significantly more space than they are used to.

“It's fit for purpose and there is space for everything. It will enable staff to deliver care in a safe environment, with enhanced respect for privacy,” Chrissy said.

The new interim CHOC has 11 ensuite bedrooms, each equipped with pull down beds for parents and plenty of storage.

“The increased number of rooms, including a negative pressure bedroom and four positive pressure bedrooms, will enable more children to receive their care in CHOC without the need to overflow into the other paediatric wards. This includes children who may be infectious with ailments such as colds or chicken pox.”

The dedicated outpatient area has separate treatment and isolation rooms, a play area with an isolation zone and an area set aside especially for teenagers to receive their treatment.

The availability of family spaces, including a lounge with a fully equipped kitchen, will assist children and their families to maintain their daily routine. They'll be able to eat meals in the dining area and keep up with school work while undergoing treatment.

“Thank you to Sony New Zealand for its generous donation of five TVs for the inpatient rooms, age-appropriate video games and a 48″ TV for the parents' lounge,” Dr Lyver said.

“As more than 50 percent of children treated in CHOC come from outside the Canterbury region, parents and children from throughout the South Island and the lower half of the North Island will appreciate the new unit.”