Surgeons train to save lives with 3D printing 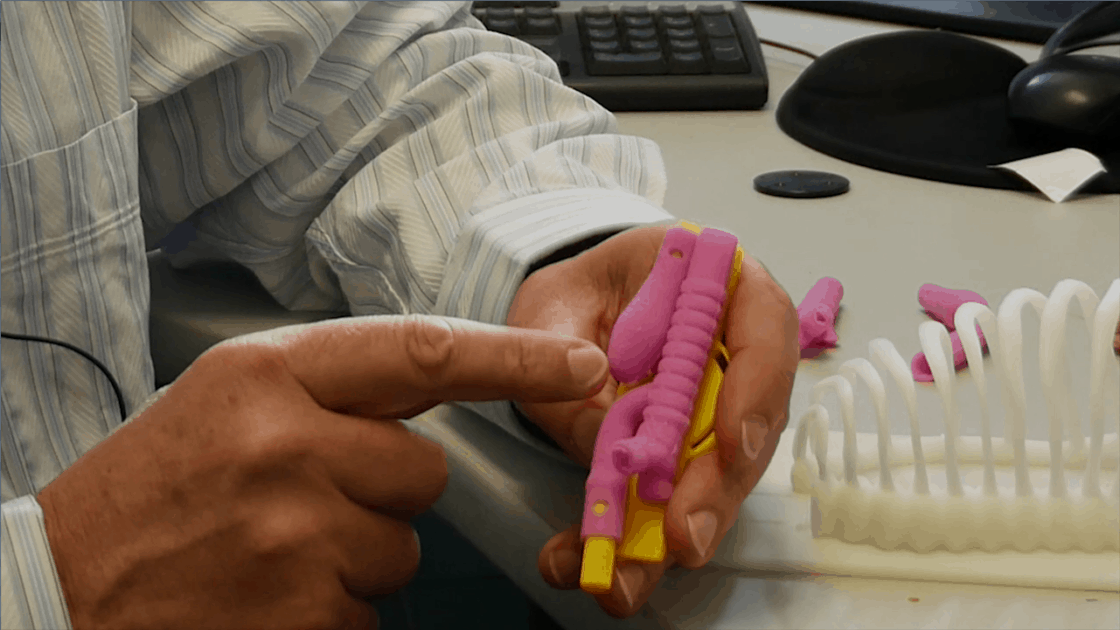 A team at Christchurch Hospital is 3D printing models of babies' chests to train surgeons for a life-saving procedure.

Oesophageal atresia is a congenital abnormality that affects 1 in 4000 babies.

The most common form of oesophageal atresia is when the upper oesophagus, which should run from the mouth to the stomach, instead comes to a dead end. The lower section of the oesophagus connects the windpipe to the stomach.

The baby cannot swallow food, and there is a risk it will overflow into the lungs. There is also a risk breathing will pass air into the stomach rather than into the lungs.

Professor Spencer Beasley, a paediatric surgeon at Christchurch Hospital, is one of the foremost global experts on oesophageal atresia.

“We normally do the surgery within a day or so of birth, which entails separating the lower section of oesophagus from the windpipe and connecting it to the upper section so the baby can swallow saliva and food.”

He says the surgery is common enough that paediatric surgeons will certainly come across it, but rare enough that it is difficult to train them in the procedure.

“Up until now, people have their first attempt at doing the surgery with actual patients.”

Paediatric Surgeon Jon Wells had the idea to 3D print a model to simulate the surgery, and Spencer helped him develop it.

They collaborated with the Canterbury DHB Medical Physics and Bioengineering department to create a lifelike replica of a ribcage, based on CT scans of a real baby.

They also developed a synthetic skin and, most importantly, a replica of an oesophagus and windpipe with the most common form of oesophageal atresia. This contains different layers of synthetic tissue that behave naturally and cause realistic problems for surgeons.

The ribcage is reusable, and the internal organs are easily and cheaply replaced between simulations.

“One of our aims is to make this model deliberately cheap so it can be used anywhere in the world,” Spencer says.

The team has also collaborated with Toronto University, which has supplied software that measures surgeons' efficiency in the simulation. Final-year medical student David Nair has been responsible for establishing its validity as an effective and useful training model.

The 3D-printed simulation has been developed in partnership with Canterbury DHB as part of the health board's focus on using technology to improve healthcare for patients and staff.