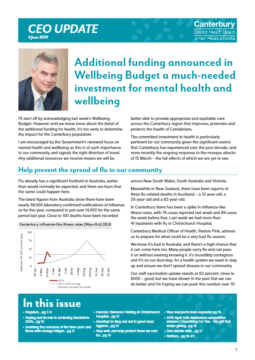 In this edition of the CEO Update…

Chief Executive David Meates acknowledges last week’s Wellbeing Budget, and, while it is too early to determine the impact for the Canterbury population, is encouraged by the Government’s renewed focus on mental health and wellbeing. He also talks about how the flu is hitting Australia earlier and harder than expected and what this may mean for the Canterbury Health System.

This issue also covers some of the topics that were discussed at a meeting featuring representatives from across the health sector on the role vaping may play in achieving New Zealand’s Smokefree 2025 goal, discusses the work of Christchurch Hospital’s ECG Department around Exercise Tolerance Tests, congratulates the winners of the prizes that were on offer for the April Falls Awareness competition, and much more.

You can read the Canterbury DHB CEO Update in two different formats: