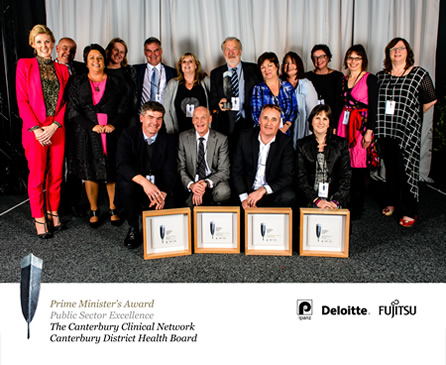 Chief executive, David Meates, said it was an honour to receive the awards on behalf of the talented teams of people who work so hard every day for Canterbury people. “To win four out of a total of ten awards speaks volumes about the calibre of people we have working in our health system.

“I'm thrilled to see so many aspects of our work being judged as outstanding,” he said.

“The Canterbury vision is of a connected health system, delivered through cross-system alliances and partnerships, with people at the centre of everything we do. Our success together as a whole health system shows we are getting closer to that vision every day, despite the ongoing legacy of the earthquakes and the challenge of ever tighter budgets.”

“A whole of system approach through a more integrated way of working is certainly working for the people of Canterbury,” David Meates said.

Note: A high res photograph of the Canterbury Health System team and their awards is available on request​.

The benefits of supporting people to stay well in the community

Key to improving the patient experience and reducing wastage is the provision of reliable, real time information.

A report by highly-regarded British health authority, The King's Fund, about the Canterbury Health System numbers Canterbury as one of only a handful of high-performing health systems in the world.