This little test could save your life! 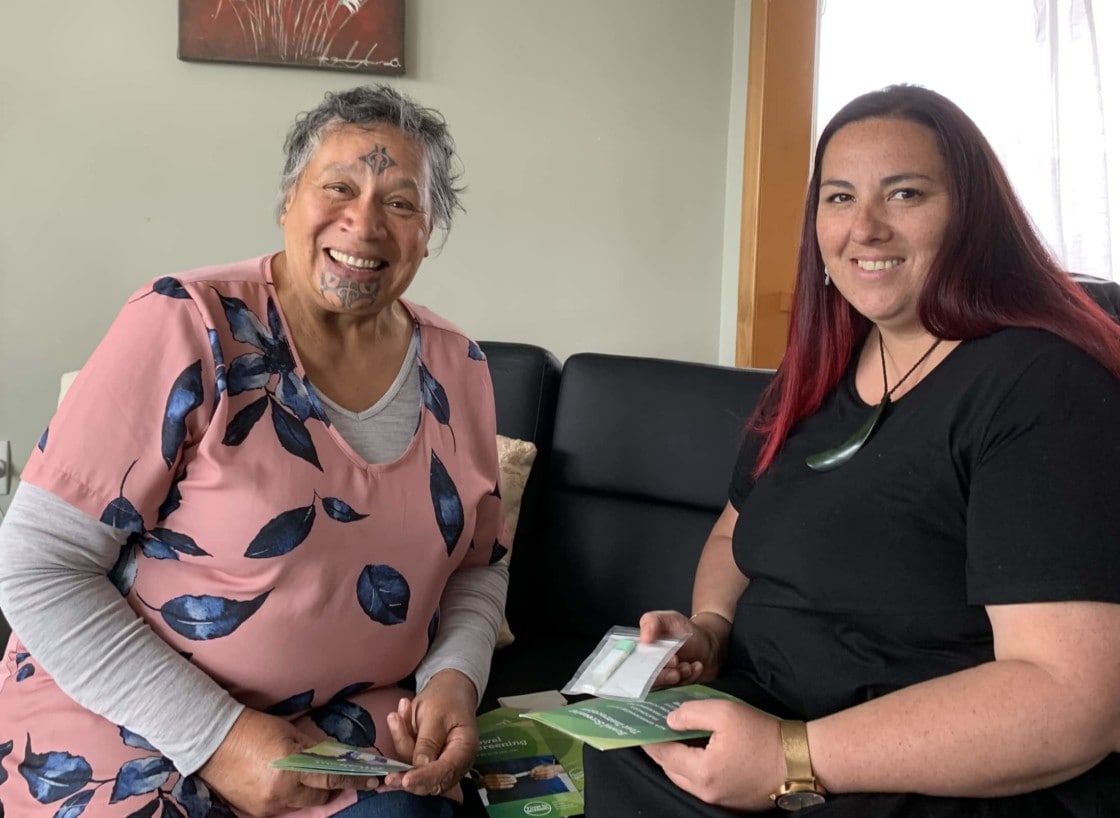 L to R: Karen Starkey and Lisa Kahu of Kaikoura are thrilled that the National Bowel Screening Programme has come to Canterbury.

When you receive it, use the kit, sign the consent form, seal everything in the prepaid package, and post it back straight away.  This little test could save your life!

If you are not 60–74, tell your whānau about the National Bowel Screening Programme and encourage anyone you know in that age range to look out for their kit and to use and return it straight away – this little kit could save their life.

If, at any age, you have worrying signs or symptoms such as blood in your faeces or unusual bowel movements that continue for weeks – don’t wait for a kit – make an appointment to see your GP team or health provider immediately. Acting now could save your life.

New Zealand has one of the highest rates of bowel cancer in the world and 1200 people die from this disease each year. It is the second most common cause of death from cancer.

The disease typically affects older people, which is why the programme is aimed at people aged 60-74.

Since the National Bowel Screening programme began in New Zealand just over three years ago, the programme has screened more than quarter of a million people and detected over 700 cancers early enough for successful treatment in 90 percent of cases.

You can reduce your risk of developing bowel cancer by having a healthy diet high in fruit, vegetables and fibre, by exercising regularly and by not smoking.

About the National Bowel Screening Programme

People aged 60 – 74 years of age are encouraged to ensure that their details are up to date with their GP team, to ensure they are easily contactable through the mail.

The programme is for people with no symptoms of bowel cancer. Anyone who has any concerns about their bowel health should contact their GP for advice.

What are the symptoms of bowel cancer?

Common symptoms of bowel cancer may include:

Although these symptoms may be caused by other conditions, it’s important to be sure and get them checked by your doctor.

Why is bowel screening important?

Bowel cancer is the second highest cause of cancer death in New Zealand.  Every year more than 3000 people are diagnosed with bowel cancer and more than 1200 die from the disease. People based in the Canterbury District Health Board’s region have the — highest rate of bowel cancer nationwide. Bowel screening every two years can help save lives by finding bowel cancer at an early stage, when it can often be successfully treated. There may be no warning signs that someone has bowel cancer. Bowel screening can also detect polyps. These are not cancer, but they may develop into a cancer over a number of years. Most polyps can be easily removed, reducing the risk that bowel cancer will develop.

Who should participate in the programme?

People aged 60 – 74 years of age, who are eligible for publicly funded healthcare, will be invited to participate in the programme. It is important to note that:

How do I participate in the programme?

You do not have to register for the programme, but your contact details (especially postal address) need to be up to date with your GP because participants will be contacted by mail.

Over the next two years, people aged 60-74 who are eligible for free public healthcare in NZ will be sent an invitation, consent form and test kit in the mail.

How does the test work?

The faecal immunochemical test (FIT) is easy and simple to do in the privacy of your own home can detect tiny traces of blood present in a small sample of faeces (your bowel motion, or poo), which may be an early warning sign that something is wrong with a person’s bowel.

Samples of faeces are sent back for testing through the mail.  People with a positive result will be contacted by their GP to discuss their results and to plan further investigation. Those participants with a negative FIT result will be recalled for repeat screening after two years.

What does it mean if you have a positive result?

A positive test result does not necessarily mean that bowel cancer is present.  Small amounts of blood in a bowel motion are most commonly caused by polyps, or other minor conditions such as haemorrhoids (piles), which can easily be treated. A positive test result means that further investigation is required. This will usually be a colonoscopy (an internal examination of the large bowel).

In the country’s pilot programme, bowel cancer was most common in those over aged 60, so the programme has been designed to screen the age group where we can achieve the greatest impact for our population. However, bowel cancer can happen at any age and if you have any concerns about your bowel health you should talk with your GP.

Who can I talk to about the programme?